James Bond films have always been famous for a few common elements. For instance, there’s always a “Bond girl,” and the intro song to each new film always causes a stir. There’s usually a noteworthy new villain, and the internet has practically tied itself in knots debating the different performances by different Bonds. More than being sequels, different Bond films are more like new versions of an established concept, which is part of what makes them so much fun to pour over and debate. And one more common element that keeps the films fresh (and makes for more lively debate) is setting.

With every new Bond movie, we get a whole new selection of gorgeous shots, usually from fascinating and luxurious places around the world. Bond, after all, is nothing if not a world traveler, and that’s been a treat for those of us who love the movies for decades. It also makes for some interesting real-world travel inspiration! While hitting all of the Bond locations may be a little bit of a stretch at this point, you can still make it your mission to visit some of the most alluring places 007 has traveled to over the years.

I’ve gone back and come up with five in particular that seem worthwhile. It’s actually fascinating that this location stands as one of the most incredible places we’ve seen in a Bond film. That’s because it featured in Octopussy, which tends to rank as one of the worst of the bunch. One of the most recent rankings of Bond films called it a low key and dull flick, and if anything that’s understating how underwhelming it is. That said, a scene in which Bond (Roger Moore) infiltrates a “floating island” of beautiful women makes an impact. That island is Taj Lake Palace on Lake Pichola in Udaipur, and not only is it a real place, but you can stay there. That ought to be a unique thrill for Bond fans, and in addition, Udaipur is simply a fun city to visit. It’s packed with sightseeing opportunities and outdoor activities, not to mention plenty of luxury dining establishments and hotels. 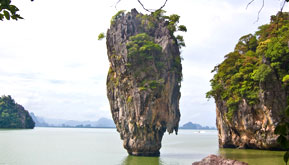 This might be my own personal favorite Bond destination. You may remember it from 1974’s The Man With The Golden Gun, which made heavy and exceptional use of Thailand for film locations. Specifically, Ko Tapu (or Tapu Island) is closely tied to the film. It’s the scene of the duel between Bond (Moore) and the villain Scaramanga (Christopher Lee). Over the years, it has actually become known as James Bond Island and still makes for one of the most beautiful spots in Phang Nga Bay, which is saying something.

There might not be a destination in the world more closely tied to James Bond than Monte Carlo. Numerous Bonds have passed through the city, to the point that its most famous luxury spots – a famous hotel and a famous casino – are thought of hand-in-hand with the series. It’s to the point where a casino arcade game called Double Diamond, based on a game from the Monte Carlo casino, advertises itself via Bond. It suggests that if Bond were to hit a slot machine, you can bet it would be Double Diamond. The thing is, it’s probably true! Bond, as evidenced by numerous films, is quite a fan of Monte Carlo, and it’s easy to see why. From the beautiful views (the city is basically an extension of the French Riviera) to the fine hotels and legendary casino, there’s just a lot to enjoy here. You can even walk through the entrance hall where the ball in Never Say Never Again was filmed. Like Monte Carlo, Rio is already one of the most alluring destinations on the planet. It’s an incredibly scenic destination and one that became even more fascinating when it hosted the 2014 World Cup and 2016 Olympics back-to-back. But for Bond fans, there’s an additional reason to want to visit. The famous cable cars that take tourists to the peak of Sugarloaf Mountain happen to be the sight of one of the more iconic Bond fights. The fight was in Moonraker (admittedly another of the sillier Bond movies) between Bond (Moore again) and Jaws (Richard Kiel), and concluded with Bond literally ziplining down one of the cables over Guanabara Bay. It’s hard to imagine any action movie making much more of a show over a specific location than this, and it only adds to the draw of Rio. This is the last location I’m pointing out, but I’d encourage you to take a look through others as well because the truth is that there are a ton of great Bond destinations out there. One other list specifically singled out the Fontainebleau Hotel in Miami, noting that the ocean-facing pool is just perfect for doing a little Bond-ing. That’s an amusing phrase, but it actually speaks to a good point, which is that this is one destination where the aim is to relax like Bond, rather than just hang out somewhere where scenes were filmed. There are scenes early in Goldfinger – many people’s pick as the best Bond film – in which 007 (Sean Connery) is simply getting a poolside massage! Granted the hotel has changed a great deal since the movie’s 1964 release. But the point stands that watching Goldfinger before heading to Miami for a little relaxation, whether at the Fontainebleau or any of the other amazing beachside hotels, is never going to be a bad move.