The Rothschild family is believed to have become the wealthiest family on earth — and also one of the most powerful and influential clans. The Rothschild banking dynasty originated from its founder and the family’s ancestor, Mayer Amschel Rothschild (1744-1812). The son of a Jewish money changer and silk cloth trader Amschel Moses Rothschild, Mayer went on to found a global banking empire.

Their name often pops up in a number of conspiracy theories and is often connected with dark secrets that not a lot of people know about. Here are some of the facts about the Rothschild family in this gallery. Lord Walter Rothschild was an impossibly wealthy banker. He was also a zoologist so he had wild zebras to drive his carriage regularly to prove that zebras could be tamed. The Rothschild family also acted as Queen Elizabeth’s principle-nominee-bankers, making her one of the richest women — or the richest woman — in the world. One of the legends surrounding the Rothschild family is that they made a great fortune during the Napoleonic Wars. The five Rothschild brothers organized and coordinated with the British during the war, establishing a vast network of contacts that included shippers, couriers, and agents.

Nathan Mayer Rothschild “won” the Napoleonic Wars in his own way, which is discussed in the next item… When word broke that British would lose the war in Waterloo, Belgium, the British supplied reinforcements that eventually led to their decisive victory. This is where one of the Rothschild agents entered the scene. His job was to provide Nathan Mayer Rothschild the news before anyone else, so he sailed back from Waterloo to London to break the news to his employer, reaching London in time before any news bearer did.

While there are several theories where the Rothschild agent made his port of call, one of the popular assumptions is that the first place he went to was the London Stock Exchange (LSE).

The legend is that Nathan Mayer Rothschild wound up at the LSE and, in an attempt to cause prices to plummet, sold all his government bonds. Everyone else followed his lead, believing the British had lost in the war. At the last minute, Rothschild decided to buy all the bonds at an all-time-low price. When news reached that the British won the war, bond prices skyrocketed which resulted in massive profits for the Rothschilds. The Rothschilds have owned several mansions including this one in France. This particular castle is so grand that German emperor William was made to remark: “Kings couldn’t afford this. It could only belong to a Rothschild!” This sounds surprising considering the fact that their name has never appeared (even a single time) on Forbes‘ 500 richest people list. This is because their vast fortune has been distributed among hundreds of heirs over the years. Having said that, the Rothschild family, as a whole, is worth about $350 billion in assets in many parts of the world. And that’s just a rough estimate. Because the Rothschilds are notorious for their secrecy when it comes to their wealth — the immense assets they possess and the scale of their operations across the globe — it is actually difficult to define the exact estimate of their wealth. Following the Panic of 1893, the US suffered a recession two years later when its gold reserves dried up. President Grover Cleveland contacted Nathaniel Mayer Rothschild, who was in England by that time. In turn, Rothschild immediately contacted Walter Hayes Burns, who then wired his brother-in-law J.P. Morgan. Together, these international financiers helped to replenish the US Treasury’s gold reserves. 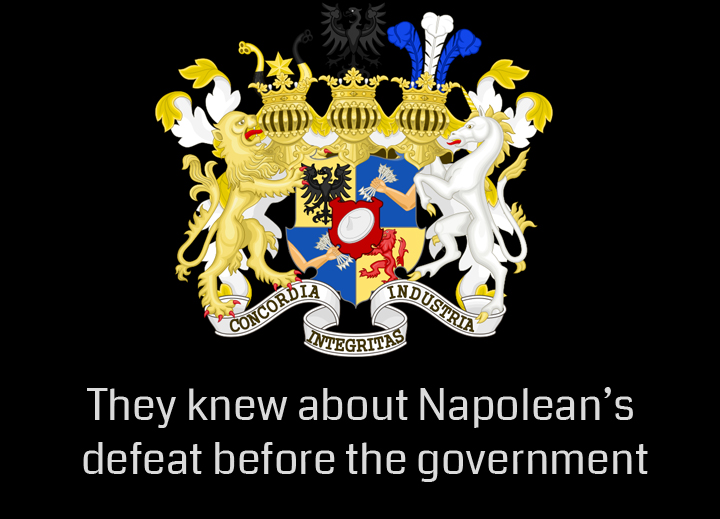 Because of the Rothschild’s efficient network of couriers and agents, it helped the family to become aware of Napoleon’s defeat a day before the news even reached the government. This is discussed in previous items. Rothschild descendant and adventurer/explorer Derek de Rothschild has a genuine concern towards the environment. So he combined his love for travel and love for nature by building a catamaran out of 12,500 plastic bottles and successfully sailed it 8,000 miles across the Pacific Ocean along with his crew. While some had thought that nobody could build and sail on a boat which uses recycled materials, de Rothschild obviously disproved the naysayers. All Mayer Amschel Rothschild’s five sons — Amschel Mayer, Salomon Mayer, Nathan Mayer, Calmann Mayer, and Jakob Mayer — were noble, meaning that they were granted hereditary nobility by Emperor Francis I. As Austrian aristocrats, all of the five brothers enjoyed this position together until Francis endowed all of them with a title of baron in 1822. This is the reason why the family uses “de” or “von” before “Rothschild” to indicate nobility.