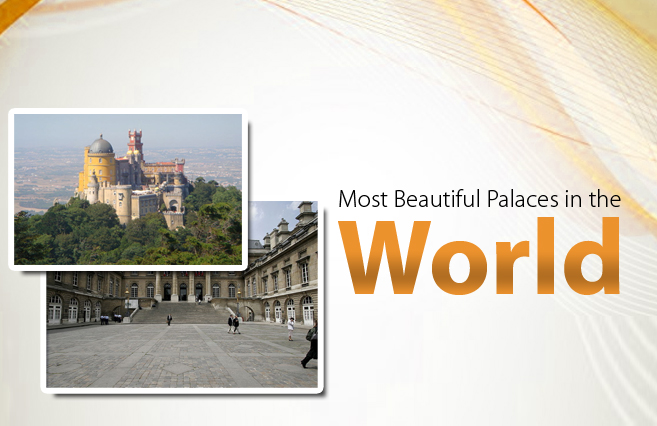 While most palaces are utterly beautiful, there are some which are particularly exquisite as well as rich in history that each of them stands as being unique from the others. Here are some of the finest and most beautiful palaces in the world! India is a country known for their richly-decorated palaces, and Mysore Palace is one of them. Commonly referred to as the City of Palaces, Mysore Palace was rebuilt from 1897 to 1912 after the original structure was damaged by fire during a wedding ceremony. The best time to visit this magnificent palace is the Dasara Festival where you will see it being illuminated with over 10,000 lights, which make the palace truly magical. The most visited palace in France, the Palace of Versailles was built by Louis XIII in 1624 as a hunting lodge. But his successor Louis XIV added expansions and turned it into one of the grandest palaces in the world. The Palace of Versailles served as the official residence of the French royalty until 1789 when they were forced to go back to Paris in the middle of the French Revolution. The Pena National Palace is located in the town and municipality of Sintra, Portugal. In 1842 King Ferdinand built this grand palace out of the ruins of a monastery which was severely destroyed by many factors such as lighting and, most of all, the Great Lisbon Earthquake of 1755. It is the oldest castle in Europe built during the Romanticist era. Now it is a popular tourist destination. The Potala Palace is located on the side of the Marpo Ri hill in the middle of the Lhasa Valley, built at an altitude of 12,100 feet (3,700 meters). This amazing construction has made Potala Palace the largest monumental structure in the whole of Tibet. The palace already existed by the 7th century but the construction of the current palace started in 1645 during the fifth Dalai Lama’s rule. About three years later the White Palace (“Potrang Karpo”) was added, and the Red Palace (“Potrang Marpo”) was added to the complex from 1690-1694. The Potala Palace served as the residence of the Dalai Lama until 1959 when the Chinese invasion of Tibet forced the 14th Dalai Lama to India. One of the major tourist spots in Vienna, Austria, is the Schrobrunn Palace, whose grandeur can be compared to that of Versailles Palace in France. It features 1,441 rooms and offers several attractions for the tourists that include the Privy Garden, the world’s oldest zoo, a maze, a labyrinth, and a magnificent marbled hilltop summerhouse called the Gloriette.

The palace was constructed from 1696 and 1712 at Emperor Leopold I’s request, and was eventually converted into a royal summer house (and what a summer house!) by the empress and queen Maria Theresa. The Summer Palace is a vast complex of palaces, lakes and gardens located 15 kilometers from central Beijing. Chiefly dominated by Longevity Hill and Kunming Lake, the Summer Palace covers a space measuring 2.9 square kilometers (1.1 square miles), with about 75% of which comprises of water. As the name suggests, the Summer Palace was used as the summer retreat by the Chinese imperial rulers, away from the Forbidden City.

By 1750 the gardens were much more expanded and the creators of these gardens sought to imitate the styles of several palaces and gardens around the country. Being a man-made lake and a reservoir, Kunming Lake was expanded to resemble West Lake in Hangzhou. Located in the Romanian capital of Bucharest, the Palace of Justice was constructed from 1890 to 1895 on the banks of the Dambovita River. The Bucharest Court of Appeal and Sector 5 Court is housed in this palace, which also boasts 690 rooms. The Topkapi Palace is one of the biggest palaces in Turkey. By the time Sultan Mehmet seized Constantinople — today’s Istanbul — he ordered the construction of a new palace. The Topkapi Palace served as the official residence of Ottoman sultans from 1465 to 1853. Over the years this palace has undergone several adjustments and expansions. The palace complex comprises of four main courtyards and several smaller buildings. Alhambra is both a fortress and a palace, located in Granada in Andalusia, Spain. Originally built as a small fortress in 889, it was eventually left in ruins for many years until it was rebuilt during the middle of the 13th century by emir Mohammed ben Al-Ahmar, and it showcased the best examples of Moorish architecture in Spain. Now the Alhambra is one of Granada’s prized locations and a major tourist attraction in Spain. The Chateau de Chambord is the second most visited palace in France after the Palace of Versailles. It has been gaining worldwide recognition because of its striking French Renaissance architecture. It boasts 440 rooms, 84 staircases, and 365 fireplaces. It was built as a hunting lodge of sorts by King Francois in 1519. Located in the heart of Beijing, the Forbidden City covers an expanse of 72 hectares, making it the biggest palace complex in the world. It was built from 1406 to 1420 and remained the residence of the Chinese imperial rulers from the Ming to the Qing dynasties (1420-1912). Now it’s a famous tourist destination. It also houses the Palace Museum, which is the most visited museum in the world garnering over 14 million visitors annually. Also known as the Grand Palace, the King’s Palace is a palace complex located in the heart of Bangkok, Thailand. Since the late 18th century it has been the official residence of the Thai royalty. The King’s palace is striking because of its collection of gold-gilded artworks and ornaments. While the King’s Palace is still officially used for several royal events and ceremonies, it is also one of the major tourist attractions in Thailand. The Mohatta Palace is located in the city of Karachi in Pakistan. The palace is a typical example of the Indo-Saracenic architecture which flourished during the British India era of the late 19th century. The striking colors of the building are the result of the combination of the pink Jodphur stones and yellow stones from Gizri used for the palace. It has an area of 18,500 square feet and is richly decorated.

If you plan to make a trip to any of these beautiful locations be sure to consider hiring a vacation photographer to capture all the great memories.