If you were asked to name the wealthiest people in the world, can you cite even one woman? If not, you are not alone. While the world’s richest are dominated by men, there are also many powerful and wealthy women living out of the public’s attention.

Here are the top 10 richest women in the world, according to Forbes’ real-time ranking during February 2017: The richest woman in the world and wealthiest person in France is an heiress and socialite Liliane Bettencourt. If you don’t know what made her rich, you probably have used one of the products her family owns. She is the principal shareholders of L’Oréal, the company behind famous cosmetic products such as Maybelline, NYX Cosmetics, and The Body Shop. Her father, Eugène Schueller, founded the company in 1907. At the age of 15, Bettencourt worked as an apprentice in L’Oréal by mixing cosmetics and labeling shampoo bottles. Now aged 93, she suffers from dementia and no longer runs the management of the company. One of the living heirs of Wal-Mart is Alice Walton, the only daughter of retail giant founder Sam Walton. She wasn’t active in running the family’s company and she busied herself in collecting and curating art. She aided in building the Crystal Bridges Museum of American Art in Bentonville, Arkansas. Walton is also a philanthropist, having donated billions to charity. Surprisingly, she has been involved in three drunk driving accidents, including one where a 50-year-old woman was killed. Jacqueline Mars is another heiress to a massive American candy company, Mars Inc., which was founded by her grandfather Frank C. Mars. She and her two brothers own the company behind Snicker’s, Milky Way, and M&M’s, and continues to oversee it. The company earned more than $33 billion in sales in 2015. She also holds board positions in high-profile organizations like the Washington National Opera, the U.S. Equestrian Team, the National Archives, and the Smithsonian. If you love Nutella, Kinder, and Tic-Tac, you can thank Maria Franca Fissolo’s family. She is the widow of Italian businessman Michele Ferrero, the owner of Europe’s second largest confectionery company Ferrero SpA.  Her son, Giovanni, took over the company after his brother Pietro died in 2011. 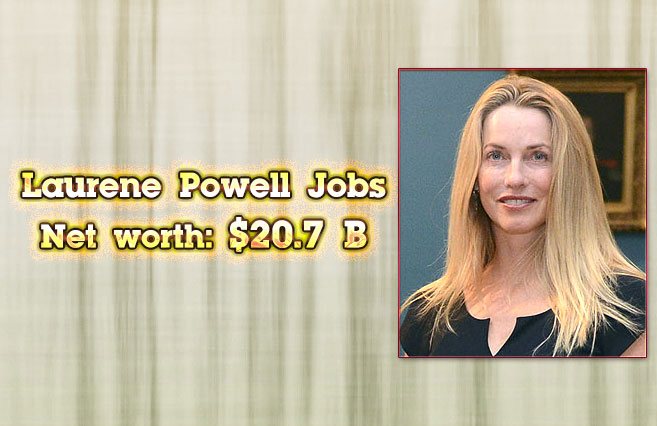 Laurene Powell Jobs, the widow of Apple co-founder Steve Jobs, is the largest single stakeholder of Disney. She is not only a wealthy widow with over 38.5 million shares in Apple – she is also a philanthropist who assists under-served students. She is the founder and president of Emerson Collective, a resource bank that supports education, social reforms, and environmental conservation. She is also a co-founder of the College Track, a non-profit organization that helps high school students prepare for college. Susanne Klatten is Germany’s richest woman, thanks to her inheritance of luxury automobile brand BMW. Her father also left her a huge stake in pharmaceutical and specialty chemicals company Altana Chemical, where she is a majority stakeholder. She is also the co-owner of wind turbine company Nordex and graphite producer SGL. Interestingly, she knows that being wealthy can be a problem, so she has kept a low profile and worked under an alternate name. Australian mining heiress Gina Rinehart is the wealthiest person in Australia. She is the daughter of Lang Hancock, who discovered the world’s largest iron ore deposit and built mines to acquire wealth. She is involved with massive mining ventures such as the Hope Downs and Roy Hill project, and also owns a stake in Ten television network in Australia. Despite being the granddaughter of Fidelity Investments’ founder, Abigail Johnson worked her way to the top to become the president and CEO of the company. She took an analyst position after she graduated with an MBA from Harvard way back in 1988, and has kept climbing in rank since then. The mutual funds giant has about $1.8 trillion in assets, and she owns an estimated 24% of its stake. Iris Fontbana gained her fortune through her husband, Andrónico Luksic, who died of cancer in 2005. Luksic was the man behind Antofagasta, a Chilean copper mining company, and one of the world’s largest mining operations. Fontbana also owns other assets and operations, such as investments within Chile’s central bank and energy infrastructure. The name says it all. Charlene De Carvalho-Heineken is a Dutch-English businesswoman who is the Executive Director of the famous brewing company Heineken International. She inherited a 25% stake in the firm when her father, Freddy Heineken, died in 2002. Her wealth peaked at $12.7 billion in 2016. She is currently the richest person in the Netherlands.