Here’s our list of the highest-paid celebrities, but we could list only 20 of them. Click through this gallery to find out who’s who on the highest-earning celebs list over the previous year, and how much they have been paid (not in any particular order). Howard Stern is an American radio and television personality who has been hosting the nationally syndicated radio show The Howard Stern Show since it first aired in 2006. The “shock jock” has also branched out beyond the airwaves as Stern has also co-hosted the reality talent search show America’s Got Talent since 2012. Stern stepped down from the show after four years in 2015. He is placed at #5 on Forbes’ list of the highest paid celebrities. James Patterson is the famous American author behind the Alex Cross series has sold over 300 million copies to date. At #7 on Forbes’ list of highest-paid celebs netting an $89 million in take-home pay. He is currently the wealthiest book author to date. Justin Timberlake is not a novice anymore when it comes to earning big bucks as he was when still then a member of boy band N*SYNC. And the “Mirrors” singer continues to earn well. Apart from the cold cash he gets from his loaded touring dates, Timberlake also scores big on endorsements as well. He is #19 on the Forbes list of the highest-paid celebs this year. Katy Perry is the colorful singer who is currently at #3 on the Forbes list of highest-paid celebs, trailing behind two boxers (Floyd Mayweather and Manny Pacquiao). Her Prismatic World Tour has brought the majority of her income this year. During each of the 126 concerts around the world, she earned more than $2 million per stop. She has also drawn in $20 million in merchandise sales. Adding to her wealth are her endorsement deals with Coty, Claire, and CoverGirl. The Katy Perry-inspired mobile app was scheduled to be released during the Fall of 2015. At #18 on Forbes’ list of highest-paid figures, the NBA superstar is the first player to make five consecutive NBA Finals appearances since the Boston Celtics era during the 1960s. In 2014 James signed a two-year $42.1 million contract with the Cleveland Cavaliers as he returned to the fold. He would have signed a four-year contract that would bring him more money, but James elected to sign this shorter contract so that in 2016 he could be a free agent again and take advantage of NBA’s new $24 billion TV deals that would send the salary cap rising. But a $42.1 million contract isn’t that bad. Aside from that huge chunk of money, James also earns big from his endorsements with KIA Motors, Upper Deck, McDonald’s, Nike, and Samsung. In 2014, the Argentine football superstar Lionel Messi was granted a $9 million raise on his 7th contract with Barcelona since 2005. This means that Messi would take home an annual total pay of $50 million through 2018. His astounding achievements — including hitting the most field goals in Barca competitions and the most field goals in La Liga games — led him to superstar status. Along with that status, endorsements came his way, including Addidas, Gillette, Pepsico, Electronic Arts, Audemars Piguet, and Turkish Airlines. Samsung even cast him as Iron Man on its ad to plug the Avengers movie. 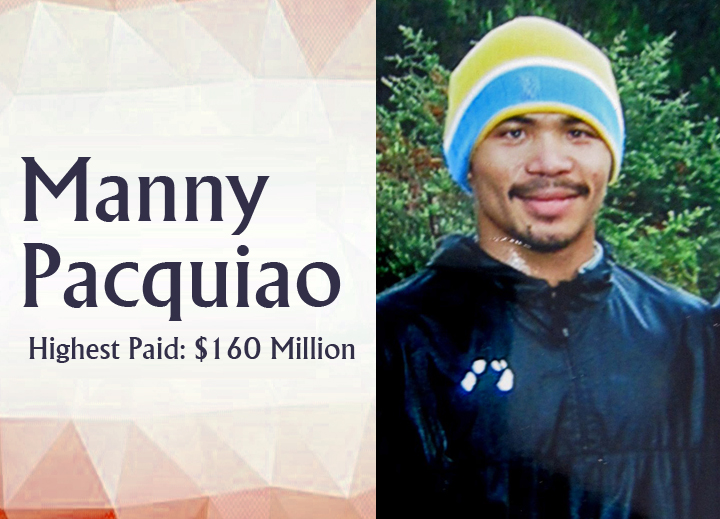 The “Pacman” took home a total pay of $125 million for his match against Floyd Mayweather Jr — that’s about four times for his previous highest pay for a single bout. His total earnings also include the $23 million for his fight versus Chris Algieri. He continues to earn a salary from outside the ring; Pacquiao has also augmented his income through his endorsements with Foot Locker, Nestle, Nike, and several others in the Philippines. He’s been sidelined for the rest of 2015 due to a shoulder injury. He is currently at #2 on Forbes’ list of highest-paid celebrities. The highest-paid boy band today, One Direction has earned seven-figure grosses in every city they’ve performed in during their 74 dates. One Direction’s takehome pay is more than twice as high as the Rolling Stone’s payday. Well, don’t belittle those teenage girls, they practically run the world’s economy! It is doubtful that this trend will diminish even since Zayn Malik left the band. They are #4 on Forbes’ list of highest-paid celebrities. Robert Downey Jr. is on the Forbes list thanks to his roles in the films Avengers: Age of Ultron and the upcoming Captain America: Civil War, for which he is reportedly receiving a $40 million paycheck. This year, the cinematic Iron Man tabbed his highest yearly payday. Much of his $80 million take-home pay comes from the hit film Avengers: Age of Ultron which brought in $1.4 billion at the box office. He is #8 on Forbes’ highest-paid celebrities list. The Swiss tennis star is currently #8 on Forbes’ highest-paid figures. Federer saw himself rebounding from his #7 drop in the world ranking in 2013. Federer is still undisputable as the Grand Slam king not only on the number of singles wins (with 17), but also on the earnings bracket (having taken home $90 million prize money). He has further fattened his coffers with several endorsements including global brands Nike, Rolex, Mercedes Benz, and Credit Suisse, as well as local Swiss brands such as the country’s biggest telco Sunrise, with which Federer has signed a five-year deal. Limbaugh is currently #11 on the highest-paid celebs list by Forbes. The American political conservative’s radio program The Rush Limbaugh Show remains the highest-rated talk show in America. The ultra-conservative views on his talk show may not always sit well with the liberals, but it has definitely brought him a lot of listeners as well as plenty of income. His talk show has been broadcast via 625 affiliates all over the American continent, with about 20 million people tuning in. He also wrote a best-selling and award-winning series of children’s books starring Rush Revere. Taylor Swift has come a long, long way from being a country starlet to a global pop star with the release of her album 1989, which became one of the biggest selling albums in 2014. It sold over 3.6 million copies across the globe, making Swift one of only three artists with a platinum album. She also made breakthroughs in the music industry by calling down on streaming — for one, she pulled her music from the streaming service Spotify and recently took a hit on Apple for not offering royalties to artists during its three-month trial period in its own streaming service. She is #8 on the Forbes list of highest-earning celebrities. After over 40 years in the business, the Eagles still rock in the earnings department. Although they haven’t had a number one single in a long time, the band is still earning well mostly from touring. Their most recent History of the Eagles tour, as well as merchandise and DVD sales, have earned the Eagles millions of dollars and helped them reach a fairly high spot at #14 on the Forbes’ list of highest-paid celebs. Harris and his current girlfriend Taylor Swift are ranked as the highest-paid celebrity couple on this Forbes list, with Harris at #17 there. He is the highest-paid DJ/electronic dance music artist with a takehome pay of $66 million. Apart from the money he’s been making from writing, producing, and performing his own music, Harris has also entered the advertising world when he snagged a seven-figure deal with Giorgo Armani, which made him the newest endorser of the luxury brand’s men’s underwear line. Ronaldo remains the greatest FIFA player in recent memory, having scored over 60 goals in each of the last four years and averaging a goal per game for his team Real Madrid. Through 2018 he will take home over $50 million, plus bonuses. Not only that, but he has also landed sponsorship deals with Nike and Tag Heuer. He is also the most followed athlete in the social media world, with over 107 million Facebook fans and over 38 million Twitter followers. He is also #10 on the Forbes list of highest-paid figures over the past year. The American illusionist lands at #20 on the Forbes list of highest-paid figures over the past year. Copperfield, who has won 21 Emmys and 11 Guinness Book of World Records. He still performs his spell-binding tricks and illusions at the MGM Grand in Las Vegas. Appropriately, Copperfield boasts a vast collection of magic artifacts. Dr. Phil McGraw first gained fame with his appearances on the Oprah Winfrey show, and now is hosting his own eponymous syndicated TV program, which is also produced by Winfrey’s production company. In addition to that, Dr. Phil has also churned out best-selling books such as The 20/20 Diet: Turn Your Weight Loss Vision Into Reality. He also launched a mobile app Doctor on Demand, which allows users to have sessions with a series of psychologist across the country. Her self-titled talk show has led DeGeneres to be dubbed as Queen of Daytime. Apart from her hit show, her own production company has five other TV shows, as well as a show on Netflix. She is also among the first figures to capitalize on the power of YouTube where she has been looking for videos of best performances and features them on her own show. She is now taking her own brand to previously uncharted territories with her first clothing line which was expected to hit the shelves during the summer of 2015. Mayweather tops the list of Forbes’ highest-earning celebrities list. His $300 million earnings overtake the $115 million that golfer Tiger Woods earned. His May 2 bout against Manny Pacquaio broke previous boxing records in terms of earnings, and that comprised of including pay-per-view subscriptions, total ticket sales, and sponsorships that generated a combined $90 million. This blockbuster match was won by Mayweather, retaining his WBO Welterweight title, but was stripped of the title the following July because of certain irregularities. He had his last bout with Andre Berto the following September, where he won in a unanimous decision. After the Berto fight, Mayweather retired from the sport, walking away with an unblemished 49-0 win-loss card.

Although Mayweather usually eschews endorsements, he otherwise signed deals with Hublot, FanDuel, and Burger King before the Pacquiao fight. The highest-earning male country star today, Garth Brooks lands at #6 on the Forbes list of the highest-paid celebrities. He successfully staged a comeback after a hiatus with a concert tour, which became astonishingly successful. Brooks has been earning over $1 million at every stop of the concert tour, thanks in part to his back-to-back shows at the same venue on the same night.