Diamonds are one of the most prized gemstones in the world and it could fetch hundreds and millions of dollars! Durable and dazzling, it also has interesting facts and stories that will amaze you more! The word comes from “adamas,” a Greek word which means “unconquerable,” “indestructible,” or “unbreakable.” It is given this name because Diamond is by far the hardest and most durable gemstone in the world. 2. When were diamonds formed

Diamonds were formed a billion years ago under a combination of extreme heat and pressure. In some cases, there are diamonds that are over three billion years old! The early Romans and Greeks believed that diamonds were the tears cried by the gods or stars fallen on earth. The Romans believed that the tips of Cupid’s arrows were made of diamonds — which perhaps explains the strong association between love and diamonds. The Romans (again) also saw diamonds as talismans, giving the wearer strength and protection from the evil supernatural powers.

The diamond is 100% carbon. Under intense heat and pressure beneath the earth’s surface, the carbon atoms are arranged in a special way that results into the diamond’s unique and beautiful crystalline structure. Earlier India was the world’s main and original source of Diamond but with time, they sold their diamonds to Venice and Europe, resulting in a decline in their supply. In the late 1800s, South Africa discovered a huge reserve of Diamonds. The best of world’s diamonds, however, are from Russia, Canada, Namibia and Botswana 5. The biggest diamond ever

The rough-cut Cullinan diamond which is known as the largest diamond weighs 3,106.75 carats (621.35 grams) and was discovered in South Africa on 26th January 1905. It is named as the Cullinan Diamond, after the mine’s Chairman Thomas Cullinan. 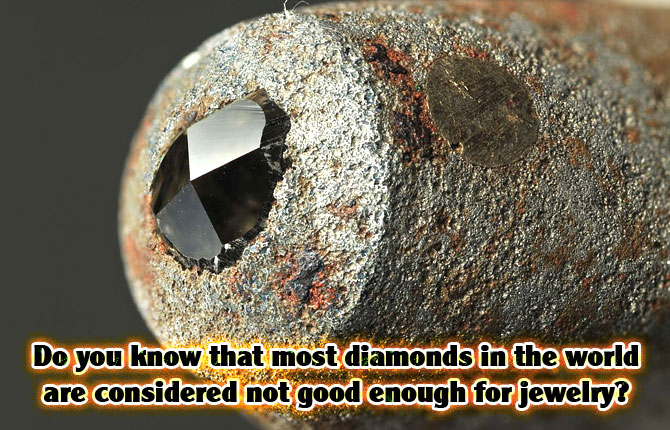 Although diamonds’ best-known use is for jewelry, most of them are not suitable enough for this purpose. Rather, 80% of the world’s diamonds go for industrial uses. They are valued for their durability and thermal conductivity. In the Middle Age, the diamond was also used to cure ailments such as fatigue, mental illness etc. 7. The colors of a diamond

The diamonds we usually see are clear and colorless, but they can also be found in pale yellow, pink, blue, brown, orange and black. Among the most famous is the one found in the late Princess Diana’s sapphire engagement ring, which continues to spark interest to similar blue diamond rings for sale to this day. Colored diamonds are extremely rare and their color is due to structural defects and interstitial impurities in them. The Hope Diamond is one of the most beautiful and dazzling jewelry pieces in the world because of its rare blue color. It originated from India, four centuries ago. Celebrated for its beauty and rarity, the Hope Diamond has otherwise gained disrepute because it is rumored to be a “cursed” gemstone. Several people who owned the Hope Diamond – from Louis XVI and Marie Antoinette to American socialite Evalyn Walsh McLean suffered hapless and tragic fates. But not all people who owned it became unlucky in life, though.

The Smithsonian Institute currently displays the Hope Diamond, which is reportedly insured for $250 million. The diamond is 100% carbon. Under intense heat and pressure beneath the earth’s surface, the carbon atoms are arranged in a special way that results into the diamond’s unique and beautiful crystalline structure. The following top five diamond-producing countries and their production figures in carats are as follows: This is really interesting… it may sound like a piece of science fiction or fantasy, but could be real! While Earth forms carbon into diamonds underneath its surface, in Jupiter and Saturn diamonds are literally formed in the sky! Since Jupiter and Saturn both have dense atmospheres, they have immense amounts of gravity, pressure and heat — the same factors that help form carbon into diamonds underneath the Earth’s surface.

First, the lightning storms on these two gas giants turn methane into carbon soot. As the carbon soot falls, the combination of pressure and heat compresses it in mid-air, resulting in sparkling precipitation of diamonds!

But before you get too excited to board a space shuttle and fly to Jupiter or Saturn, you must know that these two planets have extremely hot cores. As the diamonds fall and sink into the blazing cores, they eventually turn themselves into molten carbon. Thus, the diamonds in Jupiter and Saturn do not stay solid in the sky for long. Diamonds were first discovered in India, then in Brazil Although the United States makes up less than 1% of the total diamond production in the world, it buys more than half of the diamonds in the world market.