When first introduced, Lotus was described as a car that was lightweight and fun to drive. It was something that was designed to provide nimble handling and spirited performance every time a driver took to its seat. Today, in a world of fierce competition, it is surprising to see how Lotus has managed to survive and remain relevant. Perhaps the biggest credit could be given to its founder Colin Chapman, who started with a clear vision. Back in the day, Lotus was a comparatively cheaper option to expensive sports cars and for many, it was the perfect deal they were looking for.

Unfortunately, with the passage of time, Lotus is fading away and according to many analysts, the company will not survive for long. Therefore, before we say goodbye to an important piece of history, let us recall a brand that inspired years of competition.

Lotus founder Colin Chapman was a visionary individual. He was someone who would use his skills and tools available to try and create anything he had imagined. Colin’s career began when he joined University College in London to study Structural Engineering. Then, in 1949 he joined the Air Squadron of the University of London. In reality, this would prove to be an excellent opportunity as Colin would discover Aluminum and use it for his civil engineering projects. As it was lightweight and stronger as compared to metal, Colin found it of great use. Soon after graduating in 1952, Colin along with his friend founded the company Lotus and built a racing car during their spare time.

The first factory was built behind the hotel run by Colin’s father. Later, the company was divided into different sub-companies. One for Formula One Team, Lotus cars, and Lotus Company Limited. These three companies came under one umbrella and that was Lotus Group of Companies.

When Lotus started, it aimed of selling its cars to trialists and private racers as kits, in order to save money. Then, it came up with its very first car named the Elite. It was a 4 seater car featuring a 75 horsepower Coventry Climax FEW straight-4 engine. The most notable thing about the car was that it was built from fiberglass. The reason being that it was lighter and stiffer. Moreover, the chassis and suspension were built with the same material as well. However, the front suspension as well as the engine were supported by a frame made of steel. This combination made the car stronger, lighter, and stiffer.

Another surprising factor of the Elite was that it featured excellent aerodynamics at the time. Considering the 0.29 drag coefficient, this was a pretty good number when the likes of Ferrari and Ford, etc. were nearly putting in the same numbers.

Colin Chapman’s vision, knowledge, and skills put his company right in the middle of the competition. He never underestimated and comprised the knowledge gained during his time spent in the RAF. Due to the same reason, Lotus evolved with time and became lighter, stronger, and faster. In the 1960s, Lotus had stepped up their game by putting an end to the kits and producing fully built cars. The first fully built car by Lotus was the Lotus Elan, which was purely a sports car, featuring a TwinCam inline-4 engine. At the time, Lotus’s reputation grew as a brand that produced lighter weight and powerful cars using fiberglass bodies, overhead camshaft engines, and backbone chassis.

At first, Lotus had joined hands with Coventry Climax to produce most of their engines but later partnered with Ford. The most successful car to come out of the Lotus-Ford partnership was the Ford Cortina. It was a track car that even made its debut on Nurburgring with Jim Clark, a Scottish Formula 1 legend behind its wheel.

After giving the Cortina a run on the track, the world was amazed by its performance. The car enthusiasts were taken aback as they were unaware of its handling and capability. For them, it was value for money and they were ready to bet it all. However, Lotus was not alone, it was in direct competition with Mini Cooper and Austin-Healey 3000. Lotus was a car brand that always encouraged its customers to race their cars. Furthermore, they would ask them to bring their cars on race tracks and inspire competition. On the other hand, Lotus and its Formula 1 division were competing with some of the best drivers on the track and the toughest competition of the time. With Jim Clark behind the wheel, the success of Lotus was destined.

Jim Clark was title hungry and pushed Lotus to the limits to win 7 out of 10 races in the 1963 season. Unfortunately, in 1968 Lotus lost Jim Clark in an accident when his rear tire failed at a turn. Although this was a huge setback for the company but Lotus still managed to win a third championship title with Graham hill. By this time Lotus had proved itself to be a successful sports car brand. As a result, it moved towards building newer cars. It came up with newer versions of Lotus Eclat and Elite. Following the newer versions were Lotus Europa, which featured an engine mounted in the middle, a backbone chassis and a lightweight body. Then, Lotus packed its vehicles with a bunch of technology such as air conditioners and automatic transmission. However, the mid-engine trend would continue for years and it would become a flagship model.

While Lotus was giving birth to newer cars, it also started producing its own engines. For instance, it developed four-cylinder DOHC engines. Furthermore, Lotus would take a step ahead by introducing its V8 engines and turbocharged versions of the engines used in the Esprit. 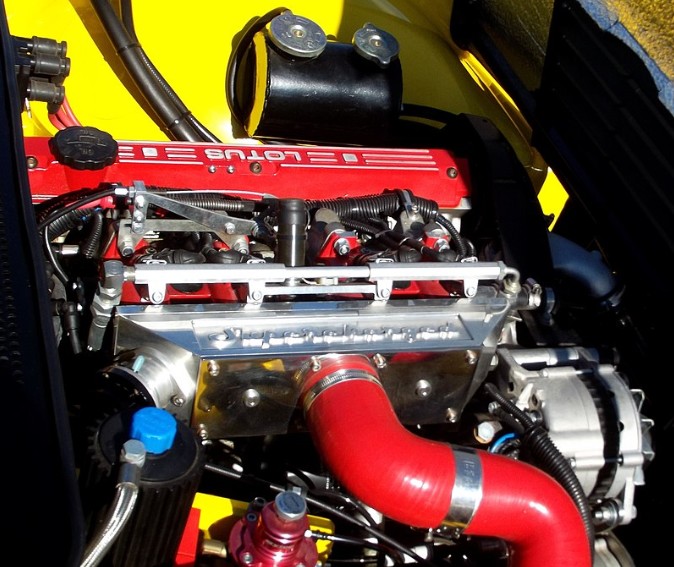 The 900 engine series was an attempt by Colin Chapman to replace the Lotus-Ford engines that had been in use for nearly 20 years. Colin wanted to introduce newer engines that were more smooth, stable, efficient yet powerful. Originally, the 900 series was developed as an engine with a 120-degree straight-six engine however due to its incompatibility with current Lotus models, it had to be scrapped.

As a result, Lotus finalized a 2-liter inline-four engine featuring four valves per cylinder and dual overhead cams operated by a belt. If you were to ask the analysts, they would swear by the fact that the 900 series was one of the best creations of the time.

The year 1980 was a bad one for Lotus. The production had dropped from 1,200 units annually to just 333. This was a huge setback for the company. As a result, Lotus had to pull out of the United States. Now, Colin Chapman was looking for money. He joined hands with Toyota and the partnership resulted in the birth of Supra and its sister car the Lotus Excel, which would replace Lotus Eclat.

This was the same time when the global recession had hit the world and the economies had come to a halt. Therefore, Lotus was no exception. Then, Colin Chapman was approached by an American investment banking professor, who helped Chapman and ultimately Lotus come back on its feet in the United States. Eventually, the sales would go up in triple numbers but as opposed to what it seemed. Things were leading towards much darker fate.

The year 1982 saw the death of Chapman due to a heart attack. Following his death, it was discovered that Lotus and Chapman were involved in the DeLorean Motor Company Scandal after its founder John DeLorean was caught by the authorities smuggling cocaine. It was alleged that Champan was bribed to work with DeLorean. However, Chapman claimed that neither he nor Lotus was involved in any such situation.

Chapman’s death was one thing. On the other, the company was drowning in debt and was literally financially zero. There was no way for it to support itself now plus the scandal and debt made things worse for the company.

Over the years, Lotus has experienced its fair share of troubles. With different opportunities coming in to breathe a new life into the company, it has managed to remain stable. Lotus was acquired by General Motors and undertook several projects such as the suspension handling of Toyota Supra Mk2 and Nissan GT-R. Furthermore, it also helped design the Tesla Roadster, which is already a hit amongst the fans even before its release. Later, Geely acquired the company and plans to introduce newer cars in the future.

Lotus had enjoyed an illustrious career. Had it been not for the scandals and financial troubles, Lotus would survive for many years to come. It would announce the introduction of newer models such as the Esprit but sadly then again due to financial constraints, the project had to be canceled. As of today, Lotus is building an all-new electric hypercar called the Type 130. The world has set its eyes on it as only 130 units will be made and sold. Possibly the birth of Lotus again.