Food is one of the luxuries of life, especially these rich, decadent, comforting foods. But the following food and beverage items here — and their prices — are perhaps going way too far! Have you heard of a dessert garnished with a thin edible gold leaf? If you haven’t, then check them out here in this gallery! Ok, the name may sound exaggerating, but there’s no doubt that this popcorn is so expensive! Why? Because it’s dusted with honest-to-God REAL GOLD! No wonder it warrants a $250-a-bucket price tag. You can find the most expensive ice cream in the world at the Serendipity 3 restaurant, with branches located in Boca Raton, Florida and at Caesar’s Palace in Las Vegas, Nevada.

This ice cream, called the “Frrrozen Haute Chocolate,” has a blend of 28 different types of cocoa (and they’re all high-grade, expensive cocoas!). And to top it all that, it is decorated with edible gold and served in a golden goblet. Priced at $25,000 per serving, this ice cream definitely costs you an arm and a leg! This super-fancy hamburger comes from Serendipity 3, the same place as the most expensive ice cream.

What makes the burger so expensive is, of course, the high-quality, gourmet ingredients: Japanese Wagyu beef infused with white truffle butter and topped with shaved black truffles, hand-made James Montgomery cheddar cheese, and a fried quail egg. Not just that. There’s also caviar, creme fraiche, and blini. One serving will set you back at $295. Does it come with a gold watch? Acqua di Cristallo Tributo a Modigliani contains nothing but the purest and most natural spring water. Its golden bottle is also an ingenious work of art itself. 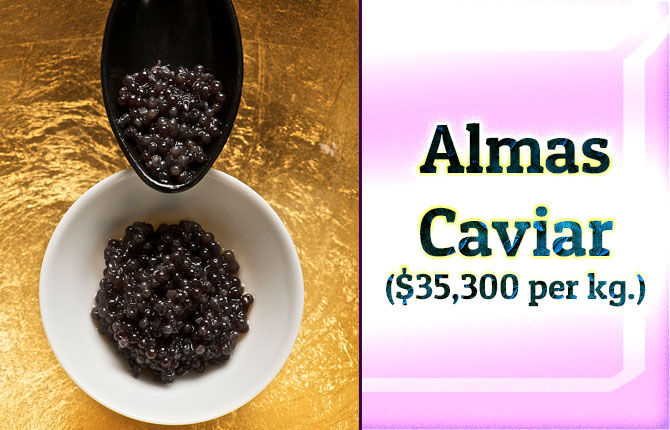 The Guinness Book of World Record lists Almas Caviar as the world’s most expensive caviar. What makes the caviar ridiculously expensive is its rarity. Unlike the usual caviars which are black, Almas Caviar is a pearly-white variety, caught from a centennial female sturgeon which is extremely rare in the world. A restaurant at a luxury hotel in New York named Norma’s serves the affluent crowd with the world’s most expensive frittata or omelet — The Zillion Dollar Lobster Frittata. It’s made of six eggs, 10 ounces of sevruga caviar, a whole lobster, cream and chives. The world’s outrageously expensive doughnut comes all the way from the UK! In 2014, a gilded Krispy Kreme doughnut was unveiled at Selfridges, a high-end department store in London.

The doughnut itself was made with highly exclusive ingredients: passion fruit and raspberry syrup, Dom Pérignon vintage 2002 champagne jelly as well as Chateau d’Yquem crème, among others. It was covered with a 24-karat edible gold leaf, white chocolate shaped into a lotus flower, 23-karat gold dust, and diamonds, which were also edible!

The doughnut was given a meticulous assembly on top of a cocktail made from 500-year-old Courvoisier and 2002 Dom Pérignon! Obviously not your everyday doughnut. Made by the Italian restaurant Chef Renato Viola, the Louis XII is not your everyday pizza. Only the making of the dough takes about 72 hours to make! The toppings include eight different kinds of cheese, caviar, lobster, and a hand-made sea salt. One pizza costs $12,000 — it must be really, really good! This is not the instant ramen you used to snack on in your college dorm — this is genuine Japanese ramen with lots of toppings thrown in. But this is the ultra-luxurious version made by restaurant owner and chef Shoichi Fujimaki, who operates an omakase (menu-less) and reservations-only ramen house in Tokyo. His ramen takes about three days to prepare! It has more than twenty ingredients including meats, vegetables, and a high-quality stock (a spicier stock is also available). One bowl costs a jaw-dropping $110! You have to request the world’s most expensive sushi from a young Filipino chef Angelito Araneta Jr. Each piece of nigiri sushi is garnished with caviar, a 24-karat edible gold leaf, and high-quality Mikimoto pearls.